Home › Driving around the States › How do I like to spend my weekends? I take mini road-trips to Montana…

How do I like to spend my weekends? I take mini road-trips to Montana… 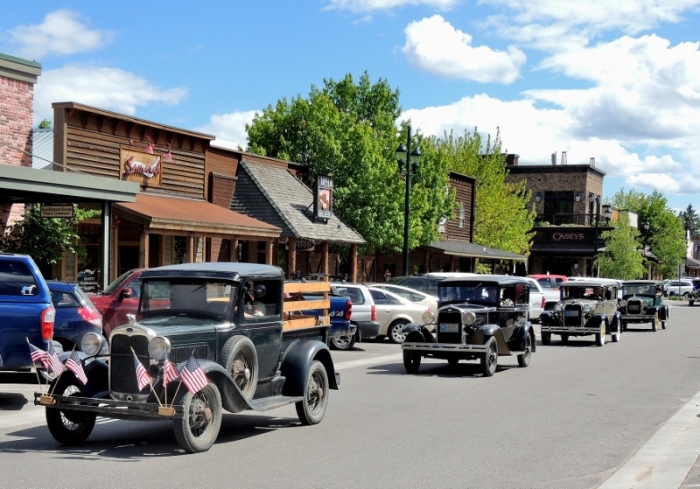 Memorial Day Weekend on the streets of Whitefish, Montana

Driving to Montana when you live in southern Alberta is quick, easy, and fun.  Depending on your departure point and the speed you drive, Great Falls, Montana is only a hop, skip, and jump away – but that’s all relative – to any seasoned road-tripper, this five hour journey from Calgary does not affect us at all, so leaving on a Friday afternoon works out well.   Another easy jaunt is heading over the continental divide to visit White Fish, Montana, or perhaps Kalispell, Montana, or both – once again an easy drive of about five to five and a half hours.  For something a little different, we decided to take our chances with Kalispell, a historic town with plenty to offer.   Keep in mind that you can easily extend this route by driving through Glacier National Park, a must for anyone who loves beautiful scenery.   Since this route traverses along a mountain range, and considering it is still “early” in the season, the “Going-to-the-Sun” road was closed because of snow conditions; however, the website did state that the road should open on June 21, but please keep in mind, it does close again near the end of September, due to snow conditions. 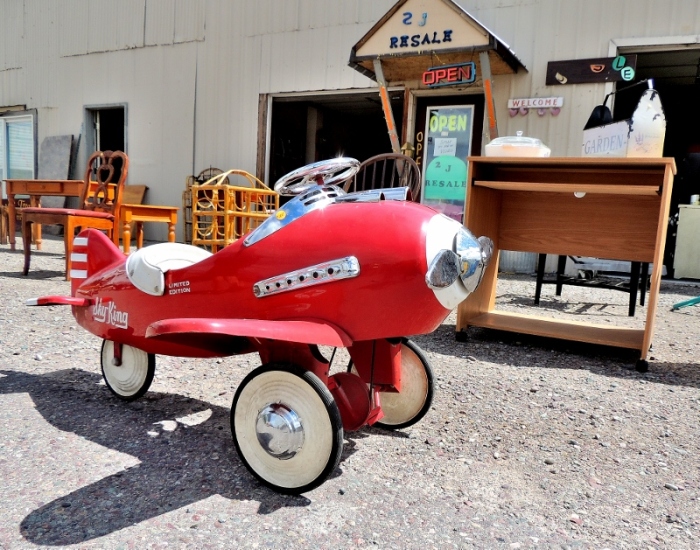 Why fly when you can drive, antiquing in Kalispell 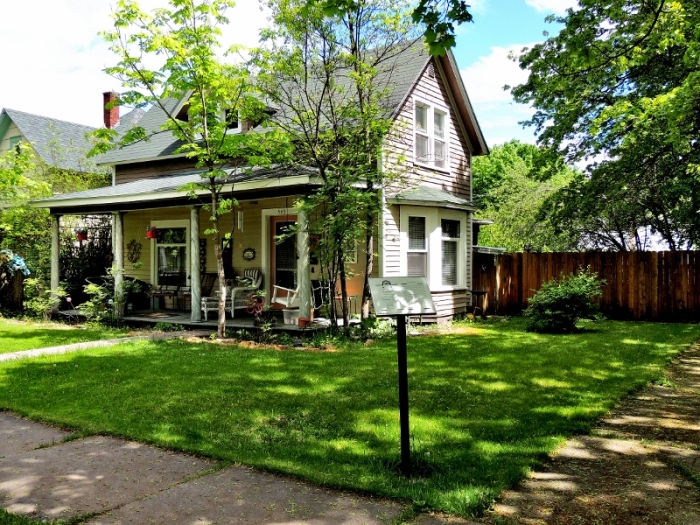 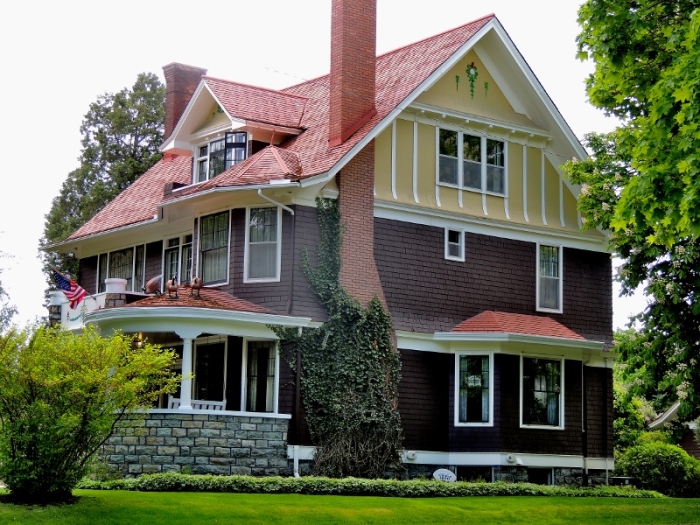 Numerous western Canadians travel to these cities to shop for great bargains throughout the year.  Now, people who understand me well know that I don’t like to shop; personally the word “mall” does not enter my vocabulary when I hit the road in search of adventure, I’m not saying I don’t buy things, I just don’t like to enter shopping malls during my trips.  So, what does a person like me do in cities or towns that promote shopping?  I search out the unusual and the unique, and this past weekend I found just that!

Since my better-half and I arrived on the Friday evening, the entire Saturday was at our disposal.   We’re not overly familiar with Kalispell, but that’s okay, it didn’t take us long to find a fantastic local bakery to wake up our senses.  The Wheat Montana Farms and Bakery, located on the Main Street was heaven to our eyes and taste buds!  Numerous shelves were filled with fresh baked goods and breakfast items lined the board.  With so many selections, it was hard to choose, but if you are ever craving a cinnamon roll, this is the place to come.  Never in my life have I ever come across such a massive roll and considering that it only costs a whopping three dollars, this roll could easily feed an entire family! 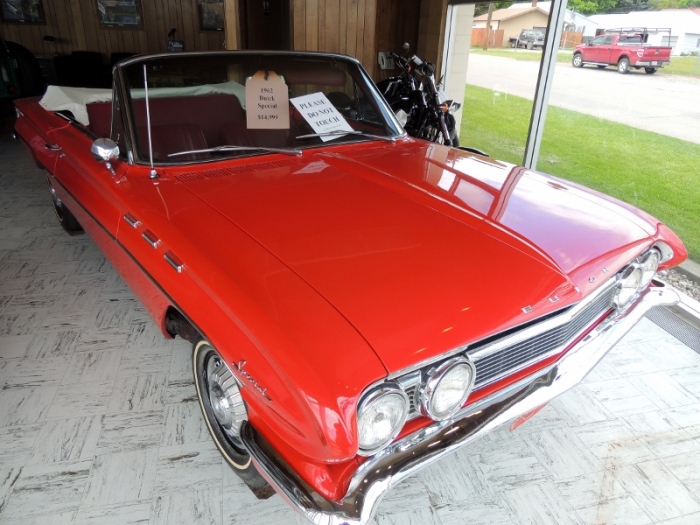 One of many amazing vehicles 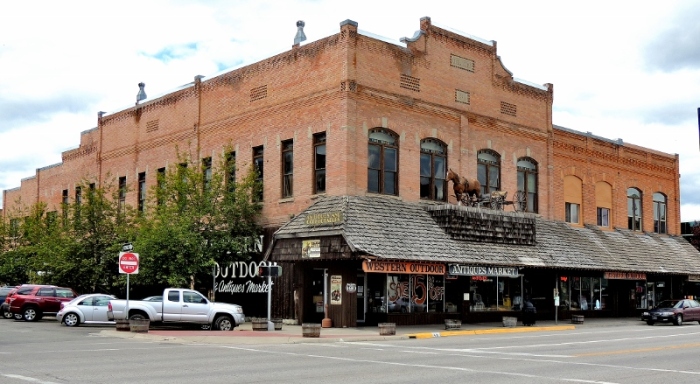 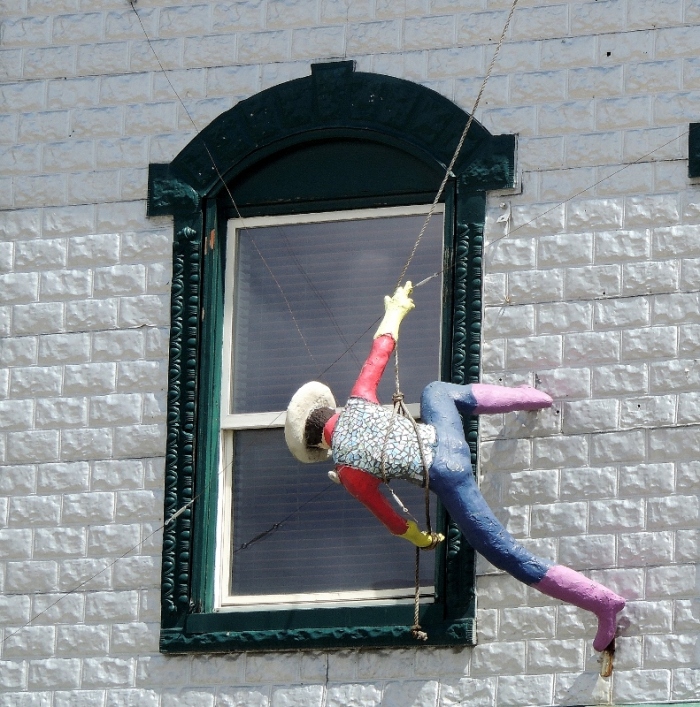 From there we decided to venture over to the Conrad Mansion.   “The Conrad Mansion in Kalispell, Montana is the most beautifully preserved pre-1900 mansion in Montana complete with over 90% of the original family furnishings.”  Tours are offered on the hour every hour; however, we when arrived it was already half passed the hour, but that was okay, we decided to head down the street to visit a local garage sale.   I’ve never been one for garage sales, considering that I love history so much, you would think that I would be out there every weekend, but that has never been the case with me (that said, the Nebraska Junk Jaunt is on my bucket list).   I must say, this was my first garage sale in the States and I had a blast!  It didn’t take me long to find two amazing “treasures”!  One “treasure” was an April 1959 issue of the travel magazine called “Holiday”, which was published out of Philadelphia.  It wasn’t about the articles as it was the ads that filled the magazine.  Simply amazing!  I even found a little ad about Alberta, I’m still trying to figure out a way to scan the ad to post on my blog; however, I don’t want to damage the spine of the magazine, so I will have to think this one through.  The other “treasure” was a 1969 Montana newspaper highlighting the landing on the moon.  Once again, the ads are priceless and the news articles are incredible!  What a flash back, it was fantastic.  It was at that moment that I became hooked and the search for more treasures was on, but alas these two would be the only treasures of the day. 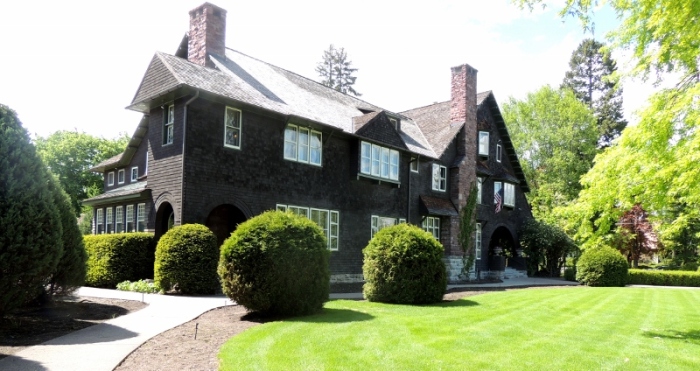 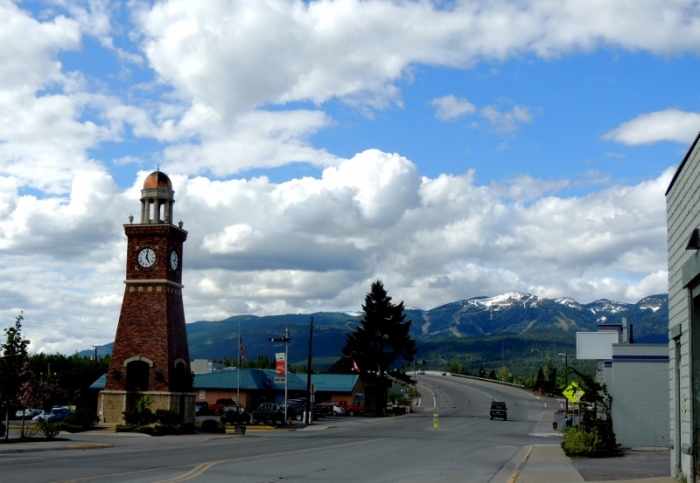 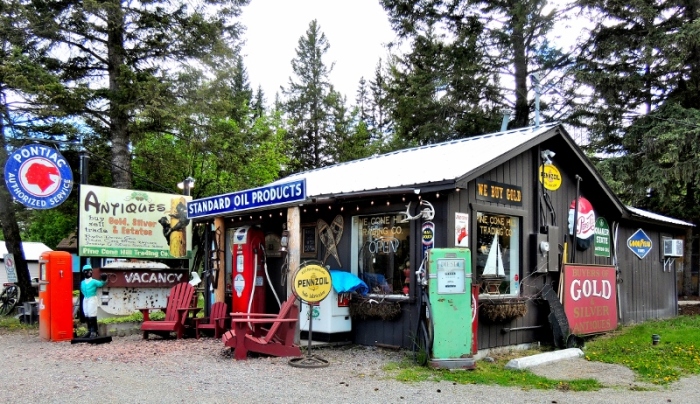 One of many antique shops 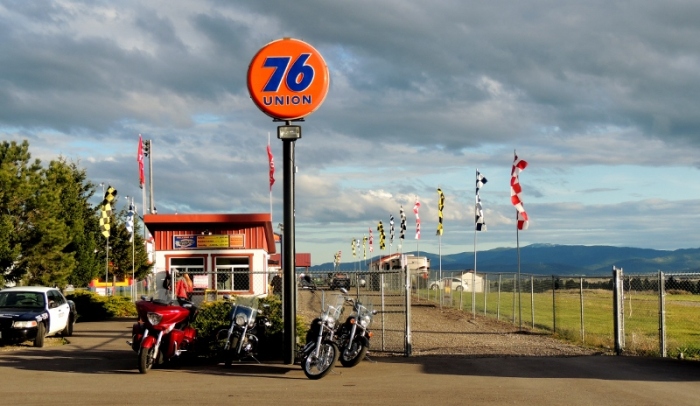 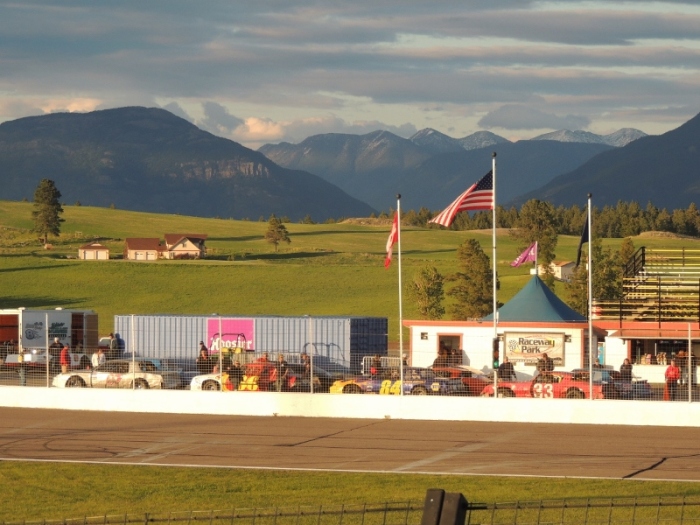 Waiting for the race to begin 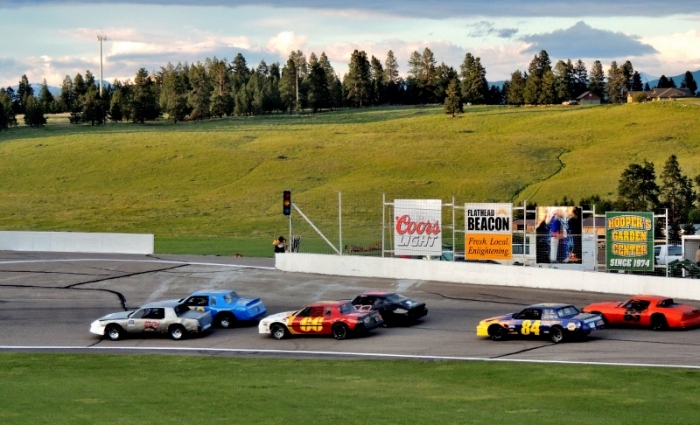 Since we still had time to spare, we decided to jump back into the car and return to the Mansion at a later time.  I was amazed at the lushness and greenery of Kalispell, simply beautiful.  Our touring took us to a couple of antique shops plus a car dealership, which housed beautifully restored vehicles.  Being a lover of restored vehicles, I certainly took my time walking around the showroom.

After more touring we decided to head back to the Mansion for the one hour tour.  Unfortunately, no photography was allowed inside the building, but the historical tour was wonderful.

From there we decided to head north to Whitefish.  Mostly known for its skiing, this town also offers a historic main street lined with a variety of unique shops and food establishments.  After spending the afternoon strolling the streets of Whitefish we decided to head back to Kalispell for a barbeque dinner before hitting the raceway to check out some car racing. 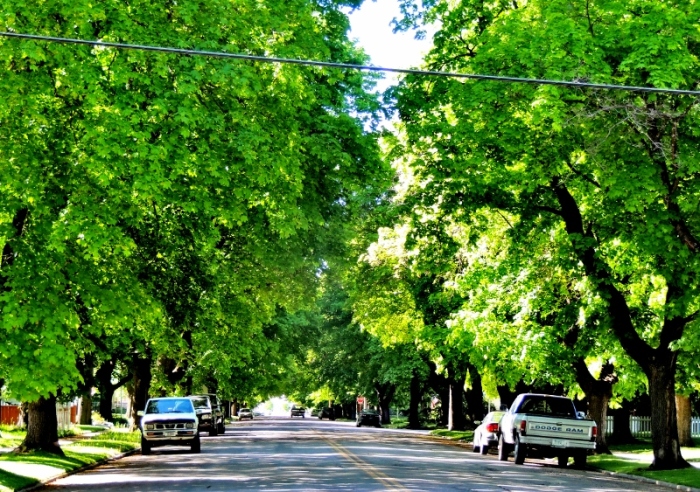 Driving around the streets, I can’t believe how green and lush it is 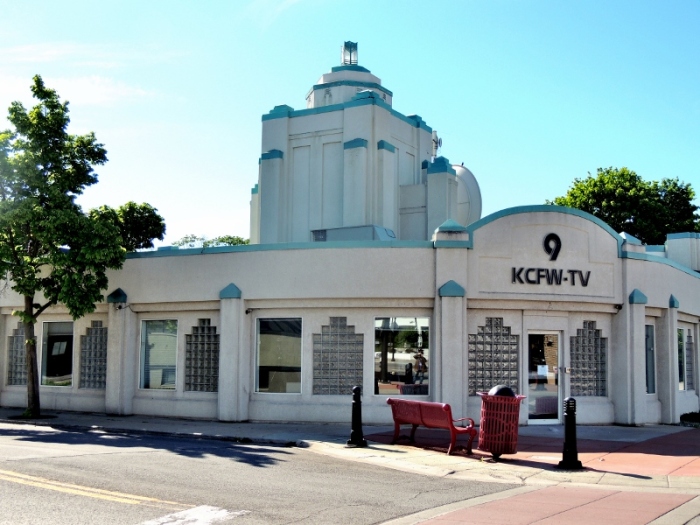 The following morning was spent taking more pictures, having a great breakfast of fried chicken and waffles – a first for me – and slowly making our way back to Alberta.  The last town we would visit before crossing the border would be Eureka, Montana, a quaint little town in the middle of beautiful scenery. 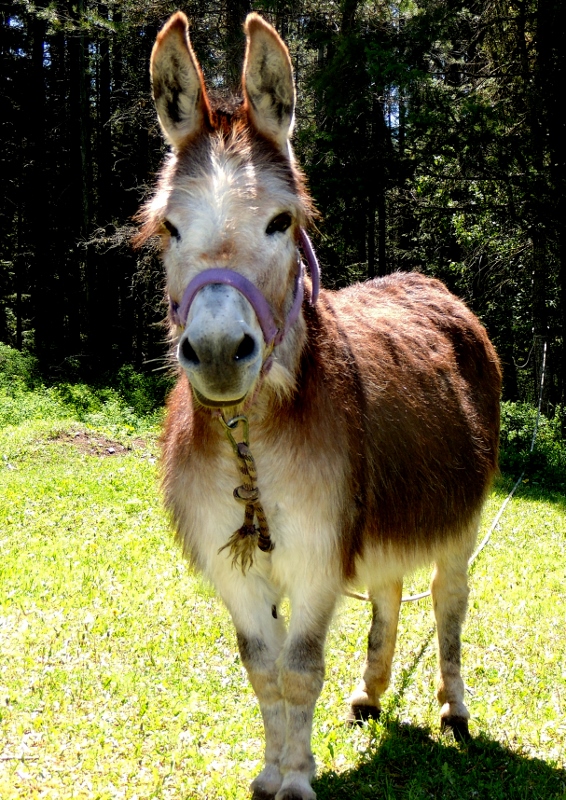 Some of the characters we met along the way 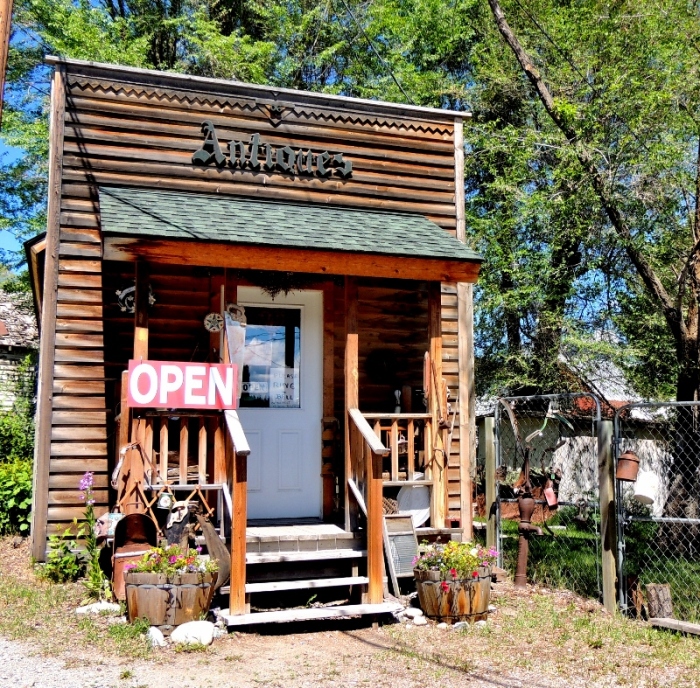 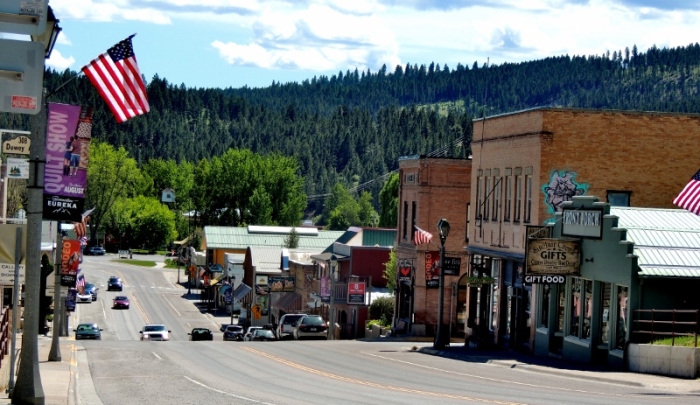 Looking down the main street of Eureka 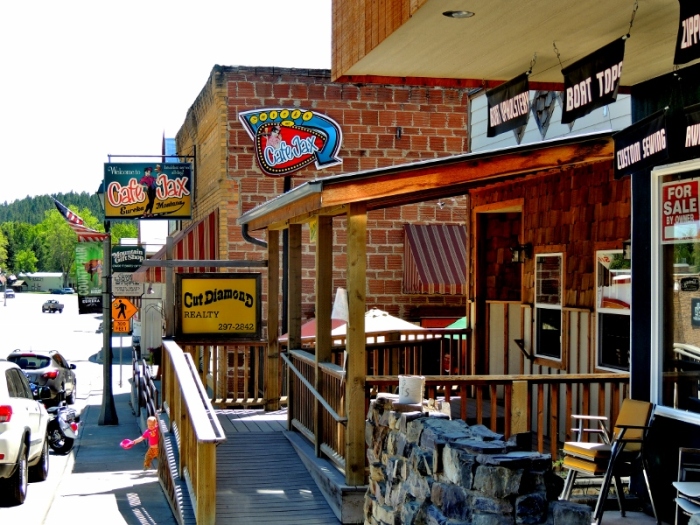 A popular food establishment in Eureka

This certainly isn’t my first visit to Montana and it certainly won’t be my last.

Like Loading...
‹ Busting a myth in the Alberta Foothills…?
Road trips are not just a North American phenomenon… ›