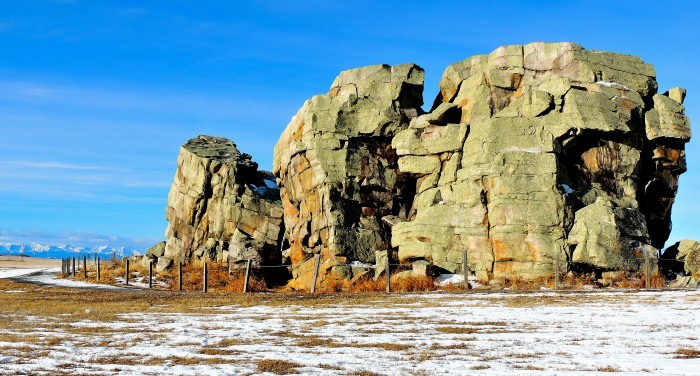 “The Big Rock” is the world’s largest known glacial erratic–rock transported far from its place of origin by glacial ice. Big Rock, also known as the Okotoks Erratic, is the largest rock in the Foothills Erratics Train, a group of rocks that were carried by ice along the mountain front and dropped as the glacier melted some 10,000 years ago. The erratics lie in a narrow band extending from Jasper National Park to northern Montana. The Okotoks Erratic weighs 16,500 tons. It measures 9 metres high, 41 metres long and 18 metres wide. The rock has been eroded into pieces, but is still a large landmark on the flat prairie.

If you look closely at the rock, you can see hardened layers of sand, silt and small pebbles. It is a piece of the Gog formation, layers of sediment deposited some 570 to 540 million years ago in a shallow sea long before the uplift of the Rocky Mountains. As time passed, the sediment was buried as layer upon layer built up thousands of feet thick. The heat and pressure generated by the weight of the overlying sediments compacted the sand grains and cemented them into an extremely hard, durable rock called quartzite.

During a period of mountain building 150 to 50 million years ago, the Rocky Mountains were formed from beds of sediments that were thrust up and eastwards. Quartzite is common in the Main Ranges of the Rockies. Big Rock was originally part of a mountain (likely Mount Edith Cavell) in what is now Jasper National Park. About 18,000 years ago, a rockslide crashed material to the surface of a glacier in the present day Athabasca River valley, and Big Rock was carried out of the mountains on the glacier’s back. The valley glacier slowly moved eastwards to the plains, where it collided with a continental glacier, the great Laurentide ice sheet. The valley glacier was redirected to the southeast, parallel to the mountain front. The erratics were deposited as the ice melted.” Compliments of Alberta’s Provincial Historic Sites