In 2002, Stephen Avenue Walk was bestowed with the honour and declared a National Historic District within the city limits.  Located in the downtown corridor of Calgary, this avenue was named in 1884 after George Stephen, the first president of the Canadian Pacific Railway.  Providing a perfect snapshot of how Calgary looked in the early 1900’s, it is now a meeting point for thousands of residents and tourists alike.  With approximately 30 restored buildings and numerous eateries and eclectic shops, not to mention the prevalent theatre district, this area has become a very popular destination for the young and old.  The City of Calgary provides a free PDF version of Downtown Walking Tours of Calgary explaining the buildings and the history of each one.

After the “Great Fire” in 1886 destroyed numerous wooden buildings in Calgary’s core, new Sandstone buildings were erected to help eliminate further destructive fires in the future – hence the nickname “Sandstone City”.  As you walk the avenue, you will be taken back in history and suddenly feel you are just another cowboy with his horse.   Enjoy the journey…on a somewhat, chilly, overcast day….

“The Trees”, to help reduce the wind gusts between the tall buildings. Also, you will see our “Plus 15” bridge in the background. “The public access through private buildings enables pedestrians to travel in weather-protected walkways, approximately 15 feet above the street level.”
Some history, compliments of the City of Calgary: “The years that followed World War II, many North American downtowns experienced a decline in pedestrian activity. This was a result of lack of investment in the inner city infrastructure during the war, improvements and innovation in transport – including a significant increase in car ownership and the loss of retail stores to suburbs.
Although this impact was less pronounced in Canadian cities, it did provide the impetus for skywalks and the underground walkways which provided a convenient and secure pedestrian environment.” Today, “The Plus 15 or +15 Skyway network in Calgary, Alberta, Canada, is the world’s second most extensive pedestrian skywalk system, with a total length of 16 kilometers (9.9 miles) and 59 bridges.” 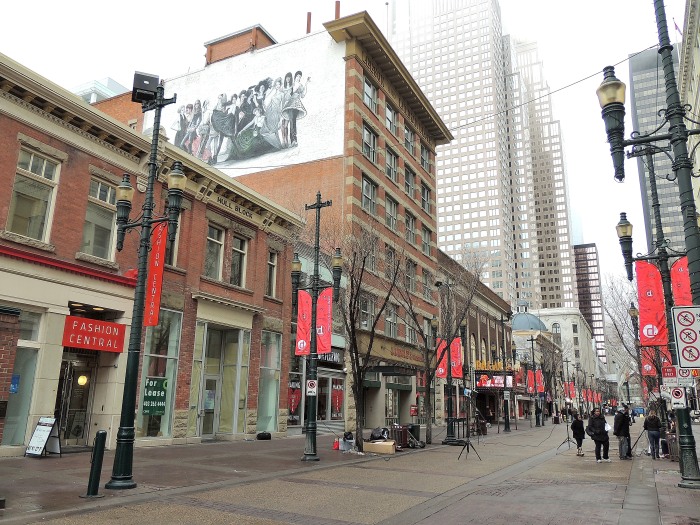 The old and new… 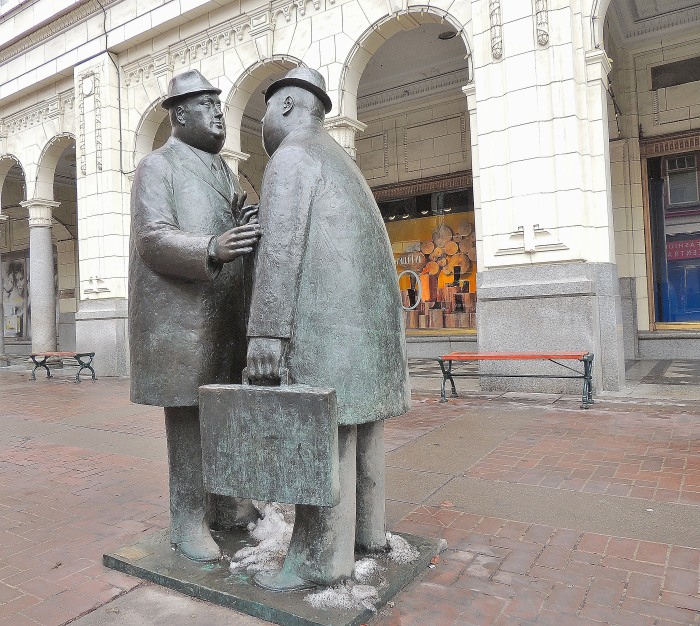 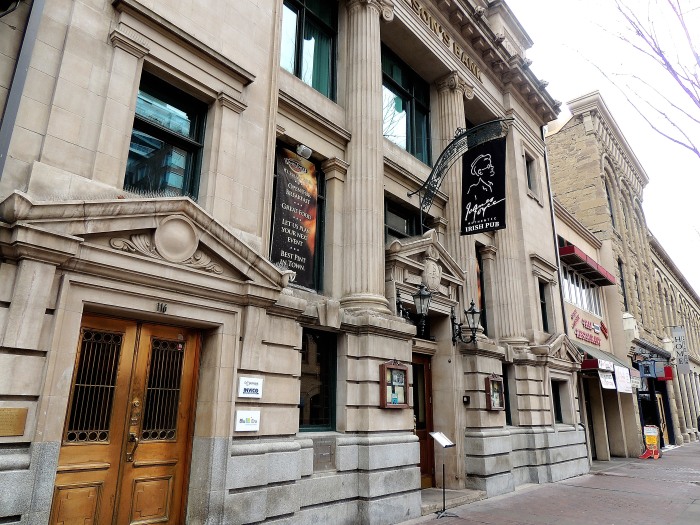 Teatro Restaurant – Theatre District, with City Hall in the background 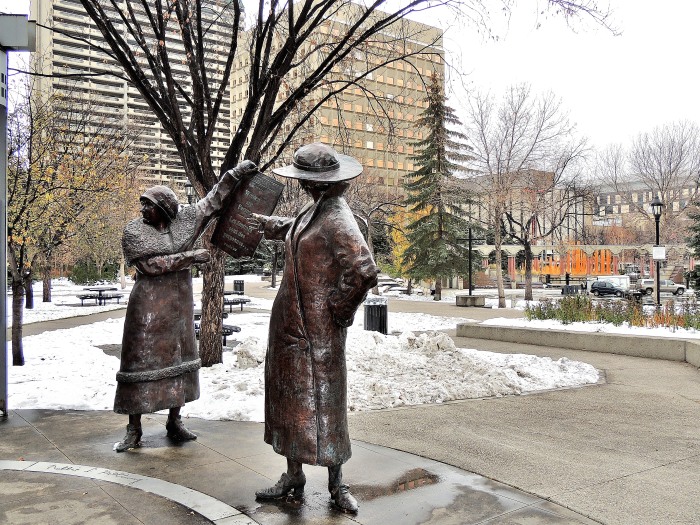 “The Famous Five”: or “The Valiant Five were five Canadian women who asked the Supreme Court of Canada to answer the question, “Does the word ‘Persons’ in Section 24 of the British North America Act, 1867, include female persons?” in the case Edwards v. Canada (Attorney General). The petition was filed on August 27, 1927and on 24 April 1928, Canada’s Supreme Court summarized its unanimous decision that women are not such “persons’.

Olympic Plaza, created as a meeting place for the 1988 Calgary Olympics. 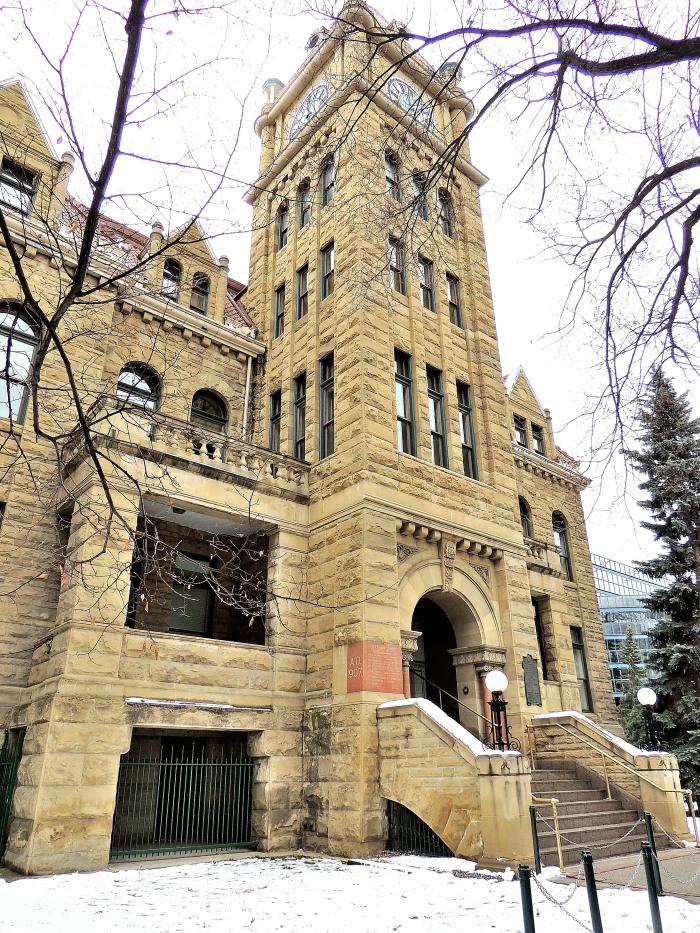 Old City Hall, Calgary:
“Calgary City Hall is of historical significance largely due to Calgary’s pre-eminent position in southern Alberta. As the leading urban centre in this region, Calgary both benefited from and demonstrated the economic, political and social development of that area of the province. The civic booster movement was popular in many western North American towns and cities during the early years of the twentieth century and the construction of such a solid and imposing a building as City Hall served as a dramatic statement about the dynamic future of Calgary and Alberta. Built in order to keep pace with growing municipal services, the building originally housed the mayor and aldermen, city government offices, the police department, law courts and the municipal telephone system. However, by 1913, the building was already too small to house these civic services. City Hall also represents the continuous presence of local government since 1885. Prior to the construction of the current building, a wood-frame civic building occupied the same location. Officially opened by federal leader of the opposition, and future Prime Minister of Canada, Robert L. Borden, Calgary City Hall is the oldest extant city hall in Alberta.” compliments of Historic Places.

Our Rapid Transit system – known to us as the C-Train 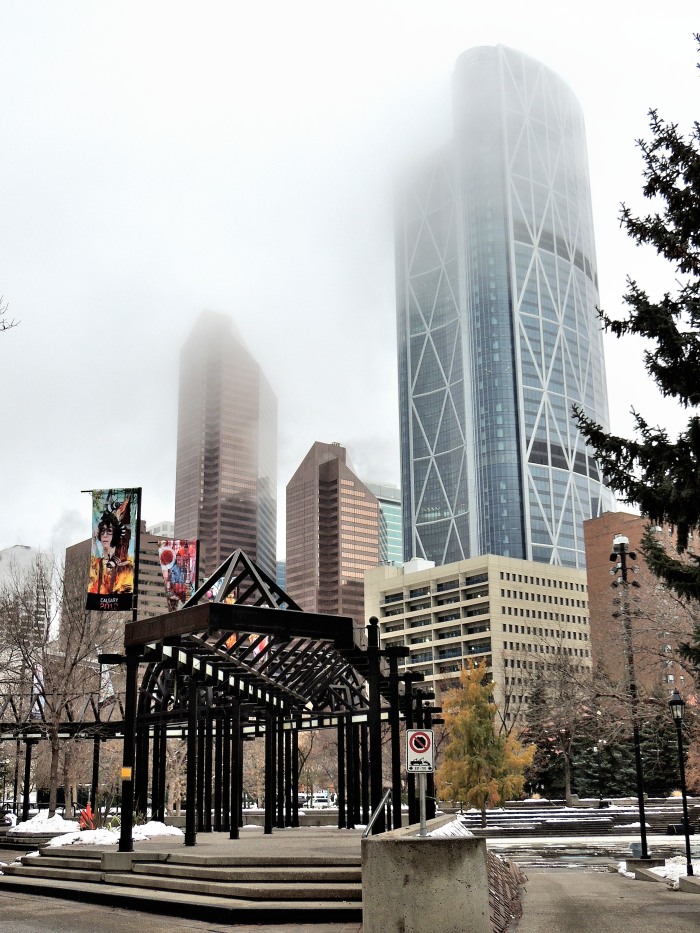 The BOW project in downtown Calgary is, at 58 storeys, the largest office space in Calgary and the tallest building in Canada outside of Toronto at a cost of $1.4 billion.

Like Loading...
‹ Weekly Photo Challenge: Geometry
From Fairy Tales to Pig Roasts and lots of other “stuff”…Calgary’s Scene… ›