The “G’s” of Calgary – Grave robbers and Giants 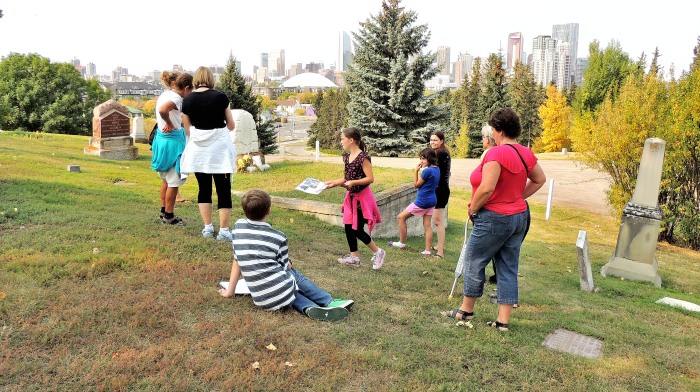 I had always heard about them, always read about them, and always wanted to go on one!  So, we did!  Back in September, I packed up the car with the three kids and hauled them off to a City of Calgary Cemetery Tour.   Actually, the kids were extremely excited and curious about this trip and so was I.

The City of Calgary offers FREE Cemetery Tours (City of Calgary Cemetery Tours) at various locations between June and October, so we decided to join the Union Cemetery Tour – the oldest cemetery in Calgary.   “Opening”, if that’s the correct wording…in 1884; however, not in its current location, no – way-yonder over in the Shaganappi Golf Course – now isn’t that an interesting tidbit.  I understand that some of the deceased still “rest” at the golf course because they are in unmarked graves.  Shall we continue…in 1891 the cemetery was moved to its current location on “Cemetery Hill” – located by the Stampede grounds on MacLeod Trail heading south.

We were the first to arrive for the tour; our Guide was fantastic and readily asked the kids to be her “assistants”.  Well, this added a whole new dimension to this trip, the kids could now play “teacher” in a cemetery by handing out various materials and pictures as we strolled along the grounds.   All guides are City of Calgary volunteers and depending on the day, tour, and location, each Guide will provide a different view of the each cemetery.  For example our guide focused on the “mavericks” of Calgary, another guide may focus on the criminals that shaped early Calgary – of course the kids were all over that one and eagerly asked if we could return for more tours.

Our Guide started our tour by asking two questions:  First question: Why is this considered a Victorian Cemetery – because the tombstones face the east and the criminals’ tombstones face the west… I’ll let you ponder that one… Second question:  How are criminals buried – with their heads facing down and their feet pointing up…why – because they will have to stay in that position for eternity, yes, something else to ponder.   We continued our tour, which lasted about 1 ½ hours.   The guide was very engaging and knowledgeable making this tour extremely interesting.

Aside from various other interesting tidbits, two grave sites stood out from the rest:

Dr. Thomas Quirk was a dentist from native Butte, Montana and he is buried in the only mausoleum located in the cemetery.  Dr. Quirk arrived in Calgary around 1907 and he practiced a new form of dentistry – considered “painless” in those days.   After his untimely death – getting hit by a horse pulling a street cleaning cart, while driving his car – still pondering… his grieving widow decided to mark his death by creating a mausoleum in his honour.  Initially, the entrance gate was left open for visitors and family to pay their respects.  However, as the story goes, sometime later Police went a house located in Calgary for an unrelated reason.  During this raid, a skull was discovered on the mantel.  After performing some analysis, they discovered it was Dr. Quirks.  Returning to the mausoleum, they discovered that gravediggers had removed his head from the casket.   Since then, the entrance door and gate have remained closed and locked.

Henry Alexander Cooper, also known as the “Yorkshire Giant” can be found in a massive grave near the center of the cemetery.    Said to be over 7 feet tall, his casket had to be specially built to hold his body.   Later in his life, he decided to join a circus and was traveling between Calgary and Edmonton when he became ill; unfortunately he was the young age of 46 when he passed away in Calgary.  During the guides’ explanation of his history, my son decided to have a sit on the lawn.  Honestly, this was the first time I had ever heard about the “Giant” and I was intrigued by his story.  During this time, our guide started to explain how wide and long his casket had to be, now during this trip we made sure to respect each grave site by walking around them not “across” them.  As the guide started to show us the “Giants” measurements, my son suddenly realized that he was sitting right on top of the grave – did his eyes ever widened.  Needless to say, he quickly got up from his spot.   Our guide continued to provide us with an enchanting story of his life; please follow this link to find out additional information of the Yorkshire Giant.

I must admit, I wasn’t expecting to receive such an extensive history lesson of the early pioneers in 90 minutes, but I did.  I highly recommend taking some time to experience a Cemetery Tour here in Calgary. 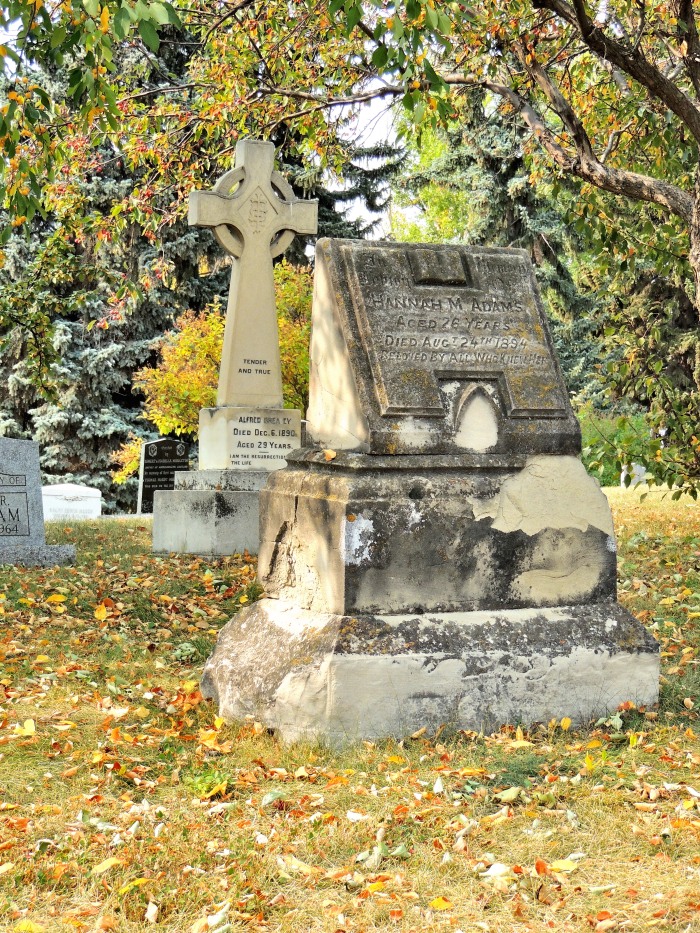