Home › Alberta Road Trips › From Rum Runners to Shoot-outs, exploring the cultural heritage of The Crowsnest Pass in Southern Alberta…Part 4 of 5

From Rum Runners to Shoot-outs, exploring the cultural heritage of The Crowsnest Pass in Southern Alberta…Part 4 of 5

Frank Slide would become Canada’s most devastating rock slide and the quiet little community of Hillcrest Mines would become known as Canada’s worst mining disaster; both within a minutes’ drive of each other. 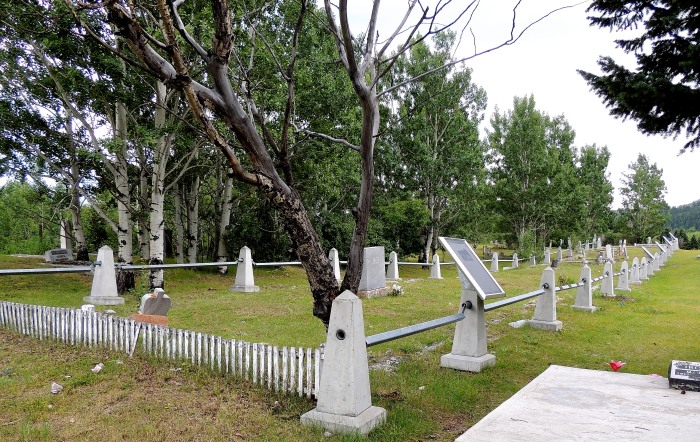 Hillcrest Mine Disaster Memorial and Cemetery…

In 1902, Charles Hill, fondly known as “Chippy”, would become the first mineral rights owner of eastern Turtle Mountain and in 1905 he would start the Hillcrest Coal and Coke Company. Trees that covered the eastern flank of the mountain needed to be removed leaving large stumps around the community.  Affectionately, the town was originally named “Stump Town”, but was soon changed to Hillcrest in recognition of the founder, and then officially named Hillcrest Mines.

On the morning of June 19, 1914 one hundred and eighty nine miners would lose their lives to a massive explosion deep inside the mine. One hundred and thirty women would become widowers, while over four hundred children would become fatherless. On the outskirts of Hillcrest, a monument stands tall and proud at the entrance to the Hillcrest Mine Disaster Memorial and Cemetery honouring all those who lost their lives on that fateful day in 1914, in addition to all coal mining disasters across Canada. Most of the victims were buried side-by-side in mass graves with their names engraved on plaques lining the grave.

Driving around the streets…

Like the other towns dotting the Pass, Hillcrest has numerous historical buildings with stories sketched deep in the community’s love affair with mining.